Today was my first longer test before the Chicago Marathon. My training has been very consistent mileage wise this cycle, but has been marred with a few nagging injuries. This was a great week of training, so I was hoping it would translate. It did (for the first 4-5 miles and overall place) and it didn't (second half of the race and overall time).

The race got off well. I intentionally held back a little and still got through the first mile in 5:57 or so. Got into a good little group over the bridge and hit the 2 mile right around 12:04 or so. Things started to spread out in the 3rd mile, but stayed consistent and relaxed to hit the 3 mile in 18:15; right on pace. Mile 4 was my best mile on the course today. Caught a second wind and started rolling by people and was getting closer to the next pack. Was around 24:20 or so before turning off toward Camp Pendleton. Mile 5 was when my hamstrings started to bother me. They've been bothering me ever since Boston in the spring and after Chicago, they'll get a break. Still hit the 5 mile around 30:40, not too far off pace, but the next few miles were rough. 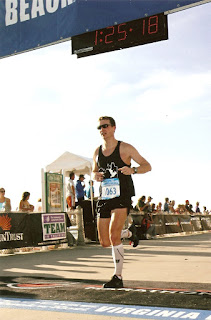 There were about 10 turns in Camp Pendleton and I just couldn't get into a rhythm. Set my sights on just getting out of there and trying to push the final 3.5 miles. When I turned back onto the main strip to head back towards the boardwalk, the wind was in our faces about 25mph or so and it was a slight uphill for the next 2 miles. This didn't agree with my hamstrings, but I hung in there and cruised over the bridge and around the windy strip before getting to the boardwalk where the wind was really kicking right in our faces. The idea of running on the boardwalk is cool, but not for 3/4 of a mile into the wind with no fans until the last 0.1 mile. Fought off the wind going slower than I wanted and then kicked it in for the last tenth to pass one guy. I really wanted top 100 and was happy with 98th, even though my time wasn't what I wanted. C'est la vie. Now just have to focus on getting my hamstrings right over the next 5 weeks for a respectable showing in Chicago!